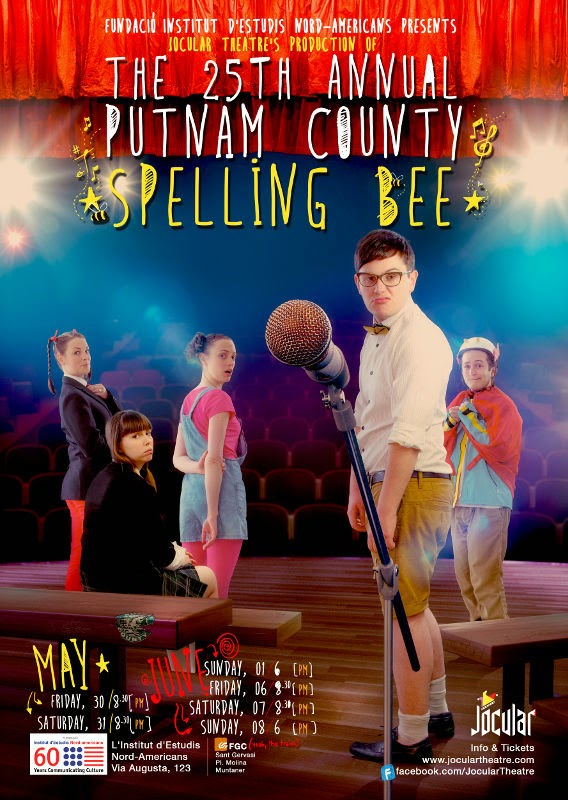 Break out your dictionaries! Barcelona's premier English-language theater company, Jocular Theatre, is back with the Tony Award-winning musical comedy The 25th Annual Putnam County Spelling Bee. The hilariously heart-warming production with music and lyrics by William Finn and book by Rachel Sheinkin is presented at the North American Institute for two weeks this spring.

Described in the Washington Post as the “funniest thing on 7 consonants”, Spelling Bee is set in Putnam Valley Middle School in Anywhere, USA and revolves around six vibrant, hopeful misfits as they vie for the prize of best speller. Negotiating prepubescent pressures and the grueling determination of their competitors, the children sing and spell their way to discovering that there's more to life than winning, and that losing doesn't necessarily make you a loser.

Overseen by grown-ups who barely managed to escape childhood themselves, our young spellers invite four members from the audience (strictly voluntary) to participate in each performance, ensuring new and unexpected comedy every night in what the show's composer describes as “survivor for nerds.”

This production is Jocular's 15th here in Barcelona and promises to put another stitch in your side with the company’s trademark non-stop onstage action, larger than life characterizations, and the added bonus of a top-notch live orchestra. Director Joshua Zamrycki returns with his 3rd musical and gives a nerd's eye view of the wonderfully traumatic yet unavoidably touching road to adolescence. Orchestra Director Mark Bahamonde and Vocal Directors Ella Galt and Fiona Allan give life to a jubilant score, while Choreographer Jade Cintron creates an affectionate tribute to the adorably awkward world of a twelve year old.

Leave your expectations at the door because you've never been to a spelling bee quite like this one. There will be mayhem, there will be triumph, and someone will karate-chop a piece of wood in half. Don't miss out on the extravaganza that The New York Times described as “irresistible, riotously funny and remarkably ingenious” in its Barcelona premiere. The 25th Annual Putnam County Spelling Bee opens May 30th at the Fundació Institut d’Estudis Nord-Americans and runs for two weeks.

HOW MUCH:
15€ General Admission
10€ Children and Seniors and IEN STUDENTS
Tickets can be purchased on the door
Reservations can be made at www.joculartheatre.com